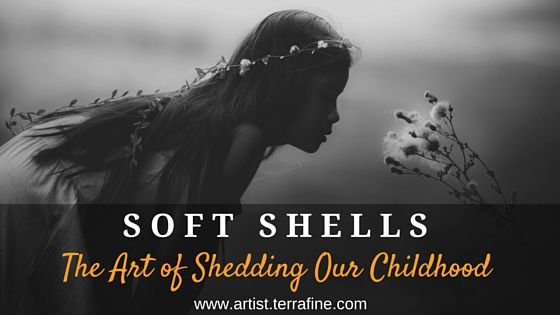 “Childhood represents the most precious, vulnerable, and innocent time of our lives. As childhood passes, it leaves behind a wardrobe of “soft shells”, the only physical evidence of our small self”. – Regan Scheiber

Scheiber, a young photographer I met in Seattle, creates works of art that capture that sense of innocence and vulnerability. The images are of children’s clothing, dresses and booties and gloves and scarves.

She takes the actual article of clothing, arranges it on a piece of hand-coated, light-sensitive paper, and then exposes it to UV light for a period of time. This process is called cyanotype and was first developed in the mid-1800’s. We recognize this method of reproduction as the same used to create blueprints.

Without knowing any of this history, I was still intrigued by the ghostly images that I saw. It reminded me of a blue x-ray.

The first image was of a little girl’s dress. It had delicate little straps and the skirt was fanned out. A periwinkle blue formed the background and was the only color to create shadow and depth. The highlights were white, standing out like bones in the darkness surrounding it.

The image was titled “Julia” and had a short description of the little girl who had worn the garment, “She had a streak of whimsy that made her unpredictable and beautiful”. In the way the artist arranged the dress, fanned out and partially off the paper, you had the sense that it was trying to dance right off the page.

It was as if Julia, though grown and far away now, had so much vibrant energy as a young girl, that it emanated from her every pore and became trapped inside her dress. The resulting impression was beautiful, delicate, and haunting.

The artist had really captured the idea of a “soft shell”; shed like a snake’s skin as it develops and grows into something new. You look at these tiny clothes and wonder how anyone had ever fit into them. Was I ever that small and vulnerable?

The other framed piece contained two images, soft lace gloves, one for each hand. This piece was titled “Emily” with the subscript “She had a gift of comforting others”.

I can picture in my head little Emily, a young lady with her curls tied up in a ribbon, a sweet pastel-colored dress, wearing these delicate lace gloves. I can see her walking steadily over to her grandmother who sits looking at an old photo. Who is in the photo I do not know but it is someone the grandmother misses dearly.

With a serious look on her doll face, Emily reaches out a finely gloved hand and gently touches her grandmother’s cheek. Not a word is said between them, but the old woman puts the photo back on its shelf and turns to smile at the embodiment of life and joy before her, to the one with the comforting touch.

It is interesting to think about the stories told by our discarded “shells”. What do they say about us? True we have outgrown them, yet they are our history, still a part of who we are today.

Can I even remember a favorite article of clothing from my childhood? It is difficult. But if I let my mind wander back…

This idea of being a “lady” had no meaning for me. I did not like to wear dresses, for how could I climb trees and ride my bike and catch frogs with a dress on. They were uncomfortable and confining and I always had to keep them clean.

They were like a straight jacket, binding me to a world in which I didn’t belong, and I resisted them with all my might. Only sissy girls liked to wear fancy dresses and I was NOT a sissy.

I was only five at this time and yet I had already met the man for me. I was going to marry my Uncle Alan who was the most handsome and fun man I had ever met. He was much older than me but this did not deter me. Love conquered all things.

I was crushed the day my mother came to me and explained that Uncle Alan was getting married. I was outraged. How could he do this to me!

My mother was smiling down at me and said to me with excitement, “He wants you to be the flower girl!” I’m sure this was meant to be an honor, as the grin on my mother’s face would suggest.

This would not do. Not only was the man of my dreams ditching me for another woman, a tramp I was sure, but he wanted to put me through the extended torture of making me stand beside him and watch!

I didn’t seem to have any say in the matter as the weeks went by and I was fitted for a dress. I was furious. Inside I screamed and wanted to rip the offending object from my body and stomp on it until vanished from the earth completely. On the outside, though, I held my tongue.

The time came for the wedding day and I was forced into my straight jacket. It was a beautiful day outside and I heard the frogs calling my name, the trees beckoning for me to climb them. All I had to do was wait until no one was looking and then sneak outside….

And then I saw him; the traitor of my heart.

He looked absolutely dashing in his grey tuxedo. He smiled at me. I wanted so much to hate him, to banish him from my heart completely. I will not smile back, I thought to myself. I will pretend he means nothing to me.

“You look beautiful in your dress”, he said. My resolve melted and I looked up at him. Ah! The way he smiled at me! I could go on with my life now because I knew he would always secretly love me back. He had called me beautiful.

I looked down at my dress, with its ruffles and lace. I looked like a burgundy rose. I remembered my Uncle’s words. I lifted my head and marched down that aisle and for that afternoon, I was a “little lady”.

Do you have a “soft shell” from your childhood? What memories does it bring up? Please share in the comments below!