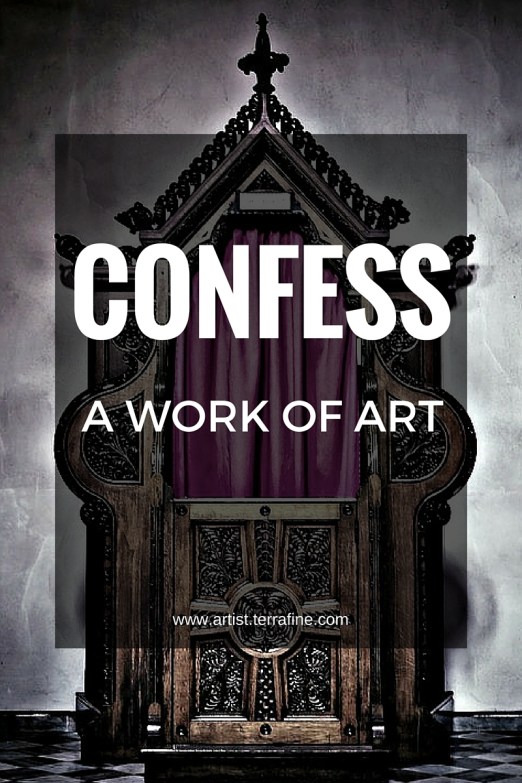 “CONFESS!” a deep voice booms from inside a large wooden box. Those grouped around it look nervous. They await their turn. A minute later, a young man slowly exits the box through one of two doors.

“How was it?” I ask. With a slightly dazed look on his face, he replies, “Disturbing. I’ve never felt so close to being schizophrenic in all my life”.

A smile spreads across my face; a sense of pride and accomplishment wash over me. “Thank you,” I return with sincerity. “That’s exactly what I was hoping for”.

A month earlier, when our professor first explained our next sculpture project, I had no idea how to build what I had in mind. The assignment was to construct a Trojan horse of our own, something that was benign on the outside but potentially harmful on the inside.

I immediately knew that I wanted to find a topic that people would care about, that would make people think. I chose the taboo subject of religion.

I feel that religion is mostly a good thing for people to have. It gives people hope and guidelines for living. What I find troubling, especially about Western religions, is the emphasis on guilt and self-induced suffering.

I think that some amount of guilt is healthy. What I don’t like is the idea of some entity watching you at all times, waiting for you to break one of their rules, so that you can be judged and punished. You spend your entire life with a sense of fear for your immortal soul and are laden with guilt for little mistakes that you have made. You are human and, therefore, faulty and forever striving for the unobtainable, only to be destined to fall short.

I wanted to symbolize religion in general; to create a structure that would give the viewer this impression was going to be difficult. I decided to build a full-sized confessional. I was not focusing on Catholicism, but the confessional to me resembled a miniature church and would work nicely to convey my ideas about guilt.

I myself am not Catholic and have never been inside a confessional; however this was not an exercise in duplicating the object accurately. The structure was merely there to give the idea of a confessional and church; like a theater backdrop, just enough to suggest reality.

I thought about how being in a confessional might make me feel; confined, interrogated, humiliated, subhuman, tormented, unworthy, inadequate. I wanted anyone entering my confessional to experience these things.

I built the structure using the same building codes required for a house. I wanted the illusion to be complete. It wouldn’t be believable to have a massive structure that shook whenever you opened the door, let alone safe. I needed the confessional to be life-sized so that people could actually go inside and interact with the piece.

I constructed a 4’x8’ box with eight-foot ceilings. I wanted the outside to be formal looking and antiquated, the feeling that it had been around for a long time. I stained the exterior wood deep, rich red and walnut, mixing the colors to make it look slightly faded and worn.

I used elaborate moldings around the crown, doors, and base. I designed and hand-cut two panels for the doors, showing intricate scrollwork with a cross in the middle.

When someone entered through the door, the room was dark. As soon as they closed the door behind them a spotlight came on. It was harsh and bright and directed right in their face; an interrogation light.

The walls were painted black. A chair was placed facing the priest’s screen, on a wall which divided the two rooms. The chair was painted black with worn areas. There was a lush, red velvet pad nailed to the seat. Two restraints, one for each wrist, were dangling from the arms. Fingernail scratches marked the area.

“Hello, my child. Please sit down,” you hear a deep voice say from the other room. You sit. From somewhere inside the wall behind you, you hear echoing whispers, “Sit..sit..join us….we are lonely…”

In front of you is the separating wall. The “screen” to talk through is made of woven barbed-wire, surrounded by an elaborate gold frame. It is placed high up the wall. This symbolizes difficulty in communication, putting it out of reach and making you feel small and insignificant.

“How long has it been since your last confession?” the priest asks. Again the whispering is heard behind you, “Oh, so long!” they wail. “Tell us…we are listening…”

Through the screen barrier, you can see the walls of the other room. The wood paneling is lit by the soft light coming through the ceiling. The shape of a cross is cut out of the ceiling and is covered with a white cloth. Your eyes are drawn upward to the holy symbol, just out of reach behind the sharp barbed-wire.

“God is listening. Tell me your sins”, the priest coaxes. “Sinner!” the voices scream in your head. “Heathen…you are so low…” they hiss. In front of your face are shards of mirror, formed into a broken and crude mosaic. When you look at yourself you see a fractured image.

“Are you telling me everything?” the man in the other room asks doubtfully. “God can see into your shameful heart”. Again the voices berate you, “Liar! You will burn…burn for eternity!” The kneeling bench is made of over a hundred 4” nails pointed upward. You can see a dried red substance covering the nails where your knees would be, left no doubt by those who came before you.

“CONFESS!” the priest bellows. “You are nothing,” echo the venomous voices behind you. “You unworthy worm…SINNER!” The shelf above the kneeling bench, used for resting your elbows while praying, has a gold container filled with salt, to throw into your wounds.

“You must be cleansed of these sins. Do you repent?” the man demands. “Kneel down before the King! Beg forgiveness!” the voices continue to haunt you. “Are you worthy? You wretched beast. Kneel!”

While sitting in the chair, you look to your right and find a leather whip, the type used by certain religious followers for self-discipline and repentance.

“You shall be cleansed through pain and suffering,” the priest says softly, as if encouraging you to pick up the whip. The demented voices chant behind you, “Flog them! Burn them! Flay them alive. String them up…crucify!”

Carved crudely into the wall beside you are the words, “Help me”, as if someone, in a moment of desperation, used their own fingernails to make their silent plea.

A moment of silence is felt. Then, a calm voice says, “You are forgiven”. Silence again. Have the voices gone away? No, a moment later you hear the soft, silky voices tell you, “You are weak…WEAK… You’re one of us”.

Around the walls at head level is a chair rail with small, gilded spikes pointed out, like a crown of thorns. If you lean back far enough you can impale yourself.

At last, you hear the priest say, “Go now, my child. Sin no more. Know that God is merciful and loves you”. A mocking laugh echoes from behind you as you leave, “He doesn’t love you. You’ll be back, unworthy wretch”.

Did you enjoy this essay? If so, please share with your friends! Tell me your thoughts in the comments below.